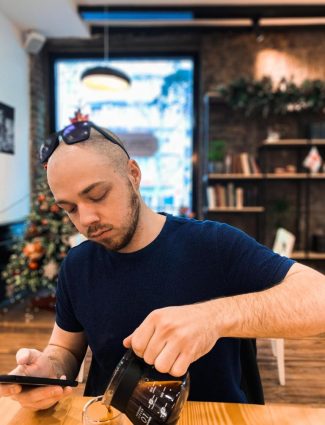 I get many questions, one of the most common ones is:

”Dylan, how can I get rid of brain fog? What is causing this?”

Today, I’m going to answer this for you. Brain fog was something I struggled with myself back in late 2017-early 2018. I couldn’t focus. I couldn’t write. I couldn’t get my tasks done.

I’d get to the end of the week and would have a pile of tasks that I hadn’t gotten to (and wouldn’t have time to get to). This went on for longer than I’d care to admit, but I found the cure to brain fog.

For those of you unaware, here are some symptoms of brain fog:

I’d often forget where I would put things. Even important things like my watch, my phone, or my wallet…

Finally I admitted to myself that something was wrong. I took a long, hard inventory of everything I was doing at the time. Once I did, I pretty much saw IMMEDIATELY where I needed to make some changes.

As I reflect back on what I did, I’ll narrow this down to the 5 TOP changes I made that cured me of brain fog….forever. Since developing some self-awareness around this issue, I haven’t had even one instance of brain fog since.

1) Understand what caused your brain fog in the 1st place.

For me, it was several things, but the main one was stress (cortisol). Stress can often trigger depression, and/or mental fatigue. At that particular time in my life, I had a bad habit of setting unrealistic expectations of myself.

To put it more accurately: I would set goals that were almost impossible to achieve (realistically).

Here are some examples of what I was doing:

Not only did this perpetuate the problem, it also made me irritable, and unpleasant to be around.

In other words, I had lost the ability to prioritize, and I made myself scatter-brained.

2) Make sure you are getting enough sleep.

It’s often the most basic things that make the biggest difference. Sleep became another big problem I created for myself. I had been trying to accomplish too much, too fast, and because of this, I developed the bad habit of cutting my sleep cycles short.

This crept up on me and began directly contributing to my brain fog problem. I’d sit down to write and nothing would come out…

The reason is because I was exhausted all the time.

I was constantly taking Modafinil and coffee. It even got to the point where all these energy drinks and coffee in turn made it more difficult to fall asleep (even when I wanted to).

I was caught in a vicious cycle. Maybe you’ve been there. I would then oversleep (from not being able to fall asleep until late), and wake up the next day stressed at what time it already was.

The cycle would repeat.

All this of course led to more brain fog, not to mention anxiety. The lesson here is: do not let your sleep cycles get out of whack.

Brain fog is often a DIRECT result of not getting enough sleep.

Do not neglect your body, your body is the vessel by which you bring your talents to the world. You should always treat your body with respect and dignity.

Brain fog can develop very quickly by eating certain foods. At least this is what I found to be the case.

If you’ve been following me for a while now, then you know I’m a big proponent of a high protein, low carb diet. When I was experiencing my brain fog, my diet at that time was higher in carbohydrates.

This started as a result of the shitty sleep quality I’d been getting. After a night of bad sleep, your willpower and ”Give A Fuck” meters are badly compromised.

So even though I was supposed to be following a no carb diet (aside from cheat meals) during the week, since I was underslept I’d often say ”fuck it”, and would have a random cheat meal.

Week after week this got worse, and before I knew it: the 12-week diet I had planned for myself had become a joke.

I got to the point where I was eating carbs daily. I’d also have the occasional coke (high fructose corn syrup), and indulge on the occasional sweet.

These foods (carbs, high fructose corn syrup, and sweets), have all been purported to cause brain fog.

Your body is well-oiled machine, so if one part of your wellness regimen gets out of whack (like sleep), it affects you in the other areas.

By this time I had also stopped going to the gym. At least with any level of consistency. So when I had this ”A-HA” moment, I realized my diet and exercise regimen needed a RE-VAMP.

I sat down and was honest with myself about what my goals were.

I took extra time to consider WHY my goals were my goals.

In this process, I made sure I wanted these things, not because someone said I ”should” want them.

Once I got clear on what my real goals were, I set a deadline. A future date in time in which I would achieve my fitness goal by. All of a sudden I felt motivated again. It took a few days for this new motivation to REALLY hit me, but my small daily wins were adding up quickly.

After a few days back in the gym, my sleep started to improve. The combination of better sleep, better eating, and better training, my brain fog started evaporating.

Moneybag’s tips for optimizing your wellness:

I always make sure to take a walk outside during one of my daily work breaks. This is more important than you realize it is, and if it’s not something you’re doing, then I highly recommend you add it in.

Also: make sure if you’re taking any medication/s, that you’re aware of how these meds are affecting you (consult your Doctor).

4) Don’t procrastinate on what you need to be doing.

Stop giving your subconscious mind items to worry about, which is exactly what you’re doing when you don’t get things out of your head and into a notepad.

I’ve found this habit helps me with taking action. I’ve said the before, but plans without execution don’t mean much.

You have to actually DO what you map out for yourself. Everything I’ve discussed up until now, will make taking action easier for you.

I’ve found that building momentum is a great way to get yourself into an action taking routine. The critical key to this is only focusing on 1 day at a time.

Don’t worry about your whole week, or whole month, when all you need to get through is TODAY.

Give yourself every advantage you can to have a great day.

Some things that helped (and still help) me are: Gorilla Mind Smooth, coffee (1-3 cups), and NAC.

The point is: don’t try to climb a mountain in a single jump, instead start small, build up some wins/momentum, and just keep winning one day at a time.

Before you know it, a whole week or month will have gone by and you’ll have accomplished A TON. Brain fog will be a distant memory to you at that point like it is for me now.

This will be easier said than done at first. This will take a little patience, persistence, and discipline on your part, but if you stick with it, I guarantee you’ll start seeing an immediate drop in brain fog.

”But Dylan, what do you mean by artificial dopamine hits?”

What I mean is unnatural source that triggers the chemical ”dopamine” to be released in your brain. In the the 21st century, more things trigger this than you think.

Here are the 2 most common culprits:

I’m not saying you have to go all out and do dopamine fast (although that would be best). Again: start small. What I recommend is turning ALL notifications off until the last 1 or 2 hours of every day.

I actually started doing this more recently. In other words: this is the one thing on this list that I didn’t do, when I was last experiencing my brain fog.

I’ve been told however by countless close friends of mine, most of who are in the freelancer or entrepreneurial space, that they started this habit with incredible results.

Brain fog is something freelancers and entrepreneurs experience probably more than anyone. Guys like us, we use our minds to create art, words, or value. We’re the ones who get hurt MOST by too many dopamine ”hits”.

I’m a firm believer that guys like us (freelancers, entrepreneurs, bloggers) need to limit dopamine hits more than ANYONE. I started this whole ”wait until the last 1-2 hours of the day” thing several months ago.

I haven’t looked back since.

1.) Its prevented my brain fog from coming back, and

This is another awesome thing you can do to help with brain fog.

Interestingly enough, it was right after I published my article on meditation, That I stopped meditating. I just got out of the habit.

What’s also interesting, is this was right about when my brain fog problem started…

This does several things:

The solution I’ve found is to meditate. You don’t have to go all out. As with everything else I’ve outlined here, start small. Ten minutes a day is what I recommend, but you could even start with five.

Something, anything, is better than nothing.

Don’t get hung up on the ”transcendental” part though, just focus on meditating 10-20 minutes a day. If you want more information on meditation, then here’s a good clip of it here.

There you have it. Brain fog doesn’t have to become a big problem for you, like it became for me. If you follow what I’ve laid out for you in this article, you’ll avoid the pitfalls I dealt with.

It won’t even get to that point for you. But if you’re already there, then these suggestions should get you out. The advice here will help you in countless other ways as well.

Next Post: How to Make 5k-10k a Month Freelancing while Traveling The World in Style