You’ve heard about the importance of having a vision. But you never really see an example of what to look for.

So I am showing you my exact vision in 7 steps.

Because quite frankly people like to over complicate this stuff.​ They’ll have you chanting affirmations if you’re not careful.

But none of that stuff compares to writing it down and then taking MASSIVE daily action. 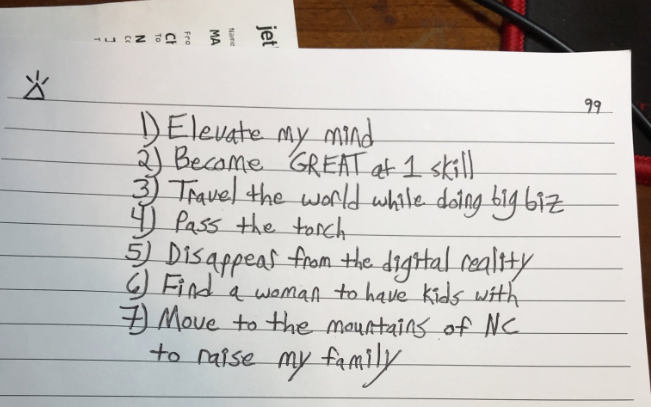 I realized a truth about life a while back. The people who worked the hardest as in physical labor.

Got paid less than the people who used their minds.

Look at your average construction worker. While some make bank. Most make $15-$20 an hour. And with that kind of money you’ll be working for decades.

Never being able to build wealth for yourself and family.

Then take a look at someone who uses their mind. Whether it’s entertainment, blogging, or just starting an offline business.

They have the potential to make much more money.

Why? Well it’s simple let me give you an example…

That is if their product is good.

Yet MOST people would rather put in a few extra hours at the job.

But don’t get it twisted. There is more to elevating your mind than just making money a better way.

Money is nothing more than freedom.

This money buys you time.

And with this time you can meditate, study, and travel the world. That’s all money really buys outside of all of the material stuff that you see on Instagram.

Since I woke up in 2015 I’ve been entirely focused on my mind. Because I knew that until I elevated my mind.

Nothing else in this world would really mean anything.

So I spent the last few years experimenting.

Going deep into my mind to figure out how to properly use it.

And while I won’t flat out tell you how to this. I’ll point you in the right direction. That way you save yourself some time.

While still finding the answer for yourself.

All you’ve got to do is go through the archives on this blog. Start with Young Man Part 1 and then read each article until you find your answer.

I also created Think and Go Hustle as a road-map. It gives you 5 levels that build upon each other and require you to take action.

Use this book well.

While I’ve built up a stack of different skills. I wouldn’t say that I’m GREAT at any particular one.

Sure, I can write better than 99% of the people out there.

I can build websites and a number of other things.

But for me to get what I want, GREATNESS is the only option.

To do that I’ve pretty much stopped most of my side-hustles.

You can call me crazy, but here’s a secret…

You can’t create something GREAT without complete destruction.

That’s been the theme of my life since waking up in 2015.

First I destroyed my job.

Then I destroyed my concept of reality.

From there I lost my mind/self so that I could elevate my mind.

And now I’m destroying my income so that I can become GREAT at 1 skill.

Because when you become GREAT at 1 skill that’s when you can pay more than the bills.

That’s when you become everything that you want and more.

Now that I’ve cut out most of my income. I am focused on 1 skill. As we speak I’m working on a 6-figure project.

While it won’t pay off until 3-6 months from now. I have learned to be patient. So I’ll just show up each day ready to work,

No matter how much or how little work that I get done.

I will move the needle everyday.

From this skill I will do big business with people around the world. All while travelling and working remotely from beautiful views.

Whether that’s Greece, Thailand, or the Utah.

Notice how specific I was with all of that? Go back and read it again. That’s how specific you’ve gotta be when crafting your vision.

After travelling and doing big business. I will pass on the torch to my apprentice(s). While continuing to build people up and work with high level people.

There will be a select group of people that I train directly.

They’ll learn what I’ve learned directly by working with me.

I’m not getting into specifics with this one. The rest is only for my eyes and the people who work with me.

5) Disappear From the Digital Reality

By this point I will disappear from the digital reality. Whether this means not producing anything online ever again.

Or simply cutting down my production.

But after I’ve passed the torch I will decide if I want to continue online.

6) Find a Woman to Have Kids With

Due to being raised on the Internet I was exposed to many different beliefs. From reading the news to the Twitter Alphas.

So I decided that I didn’t want to have any kids. As marriage, raising a family, and being a man seemed like they just brought stress and burden.

But a funny thing happened a few years ago. As I was paying for my gas I saw something that opened my eyes.

A man came in with his wife and 7 kids.

Everybody was smiling and you could tell that he had a strong foundation.

To sum it up, he pulled the blind-fold from my eyes.

Seeing people such as Tanner has also helped me see that raising a family isn’t as dangerous as certain people make you think.

I will find a girl over the next 3 years that will travel the world with me. She will be a great cook, have high energy, and be interested in business.

7) Move to the Mountains of NC to Raise My Family

As I have kids I’m going to move away from the city. I’ve spent most of my life out in the country and will provide that for my kids.

Whether that means the mountains of NC or elsewhere. I will create an environment that molds them into real human beings.

Not spoiled brats who live on their phones.

So at the age of XX I will start a family with a feminine woman. We will move to the mountains of North Carolina where I’ll have a nice mountain house.

We live on 187 acres and make most of our own food.

My children are home schooled by the best teachers in the world:

Use my vision in 7 steps to create your very own vision. And remember that the more specific you are the more powerful your vision becomes.

This article gave you the template for building your vision. Below you’ll find a free book that will help you put your vision into action.

Now this will help you fill the your vision in.

Previous Post: The Missing Aspect of The Law of Cause and Effect (Video)

Next Post: How to Make A Thousand Dollars Without Leaving Your House