Most people tell you how to make money but few tell you what it feels like. Here is how making money while you sleep feels.

Waking up with emails saying you made money the night before is one of the greatest feelings in the world.

Knowing that while you were sleeping someone saw your service and how it could help them reach their goals makes every morning phenomenal.

The idea of solving people’s problems and being rewarded with money is the best job in the world.

I’m still in the part of my life where I have to hustle each day. I haven’t earned the right to not give it my all every second of the day.

To be honest even when I have earned that right, I will still give my all. There is no reason to ever stop pushing the envelope.

Every time I wake up to new money I feel alive. When I wake up and haven’t made money then I know that I just have to hustle more.

Waking up with new sales in my inbox fills me with energy and excitement. It makes me want to push the limit even more.

Imagine making more money in a night than you used to at your 8-5 job in a week. There really isn’t anything more empowering than that.

I remember when I worked at the car dealership making $550 after taxes every two weeks. I knew how to get out of that life but I didn’t think I’d actually survive without a job paying me.

At night when I wanted to call out the night before I would think to myself what it must be like to make money without a job.

People who made money from their laptops seemed to have it all. They seemed to love life and always be living how I dreamed of.

I finally had enough and decided to put in my two-week notice.

April 9, 2016 I quit my job. I did Uber to pay my bills and spent the rest of the time figuring out how to make this online stuff work.

From there I did other things but then I decided I wanted to start a business. At the time I wasn’t quite ready to write a book so I decided to launch a service.

The service was something that I did on a small scale offline. I had a bigger vision for it but lacked the infrastructure to make it work how I wanted it to.

I reached out to a friend of mine and to my surprise he wanted to do something similar. We got together and 8 days later had built Sites Delight.

Taking an idea in your head and making it your reality is great. Waking up to new money in the bank is Heaven on earth.

If you want to experience making money while you sleep I have something simple to tell you. Stop thinking about how to make money and focus on helping people.

I know everybody tells you that but it’s true.

I spent years trying to figure out how to make money. Once I stopped thinking about the money and turned my attention to helping people, I made money.

It seems counter intuitive but it is how this world works. You won’t make any real money until you start helping people with something.

If you feel stuck then here are 4 ways you can make money as a Young Hustler. Other than that just get started.

Making money isn’t hard. What fucks most people over is having the habit to do the things that make money.

Don’t let the lifestyle guru’s tell you it will be a easy ride though. You will have days where money will run low or something frustrating will happen.

But you will have even more days where everything works out. All you have to do is keep going and hustling.

If you got something from this article I ask that you share it with a friend of yours. By you sharing this article maybe something will click in their head.

PS: Find Out About Our $100 Commissions Here. 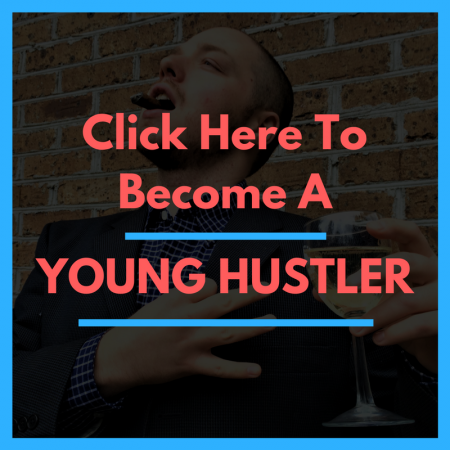 Previous Post: I Found God in The Bathroom Staring at Me

Get My Book Think and Go Hustle Sent to Your Email.