Mike Cernovich recently appeared on 60 Minutes. In this article I will let you know my reaction and what Mike being on 60 Minutes means for you.

Just to give you a back story, I have been reading Mike for a year and half to two years. I wouldn’t label myself a day one but I have stuck around since then.

Mike Cernovich has been blogging for 10-15 years and really started getting traction in 2014 and 2015. He used to write about Game related topics before moving into mindset, and now politics.

Mike has done everything from creating a successful documentary, launching a best selling book, to now being read by thousands of people daily.

What I admire about Mike Cernovich is that he is authentic. While I don’t know him personally I had the pleasure of meeting him in person.

Who he is online is who he is offline. I was able to meet his wife Shauna, his daughter, and their dog Julius.

Julius is one of the friendliest dogs you will ever meet. He didn’t even know me yet was all over me the second I got close to him.

For many Mike has been a thought-leader and inspiration. In my case he has served as an inspiration to me for what is possible.

Mike Cernovich, Victor Pride, and Chris Deoudes have changed more lives than most mainstream organizations have.

How have they done this?

They have changed lives by being authentic and using tools that everyone has access to. Using laptops, microphones, and cameras they have spoken to millions.

Instead of relying on teams of people and millions of dollars they have taken most of the weight onto their own shoulders.

This has inspired me as I am on a similar path. I run this blog and have my own YouTube channel. These platforms are my way of getting my truth out and as of now I run everything by myself.

Of course I have help with the camera and then co-founded a company with Alex Mangini, but all in all I am alone.

If you are someone with a message I recommend that you emulate Mike Cernovich, Victor Pride, and Chris Deoudes. See what they have done and then get to work on building your own platform. 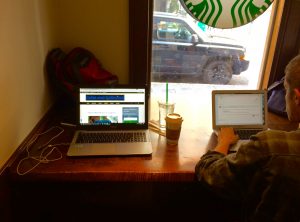 Figure out what it is that you want from life and then get to work. Every single day should be given to whatever you want.

There is more than enough information out there waiting for you to find it. Everything that you can possibly imagine is yours for the taking through action.

I’m only 23 years old and people thank me everyday for what I do. Imagine what you can do just by speaking about your life to like-minded people.

There are people just like you that are searching for your work. All you have to do is put it out there and then they will find it.

Don’t worry about the numbers just focus on the content. That is something that Victor told me when I interned with him in California.

At the time I didn’t want to accept that. It wasn’t until I got back that I realized the truth of what he had told me.

You see it is content that people want. By focusing on the numbers you are ignoring the most important aspect of what we do…. the people.

So don’t worry about what your numbers look like and instead get to creating. Whether you’re an introvert or trying to pack on muscle, you have a message.

A message that people want.

I commend Mike Cernovich for getting on 60 Minutes and doing everything else that he does. He is shining light on many issues in the United States and world.

If you takeaway anything from Mike let it be this:

Speak your truth and don’t back down

Before you leave this article I want you to seriously think about what you want in life. This is the day that you can change everything for yourself.

Write down what you want and then get to work.

Join me every week for personal stories, posts, and videos.

Next Post: Take a Peek At What I’ve Been Going Through: Last 3 Months of 2017

Check out my book:

Life is a game. How would you like to make the rules?

Think and Go Hustle is your tool to build not only yourself but a game where you’re the main character. It’s time for you to flip the script and take charge of your life.

For the first time ever you will be introduced to a book that acts a video-game. During your journey, you will build your character, create a script, and learn actionable strategies.

What separates Think and Go Hustle from other books is two-fold: